An Absolute Beginner's Guide for the RP2

From Retroid Handhelds
Jump to navigationJump to search

Welcome to the Retroid Pocket 2![edit]

This guide has been written for people who just want to play games on their RP2 as soon as possible, without any messing around in Android. I'll show you how to install RetroidOS on your new RP2, and give you a couple of basic hints to help you start using it. RetroidOS is the alternative operating system that will turn your RP2 into a simple retro handheld that works without having to install any extra software or tweak any settings.

Make sure that your RP2's battery is charged to at least 80% before continuing to follow this guide.

Before turning on your RP2[edit]

If you would like to use a larger micro SD card of your own, rather than the 32GB card that came with your RP2, follow these steps:

Turning on your RP2 for the first time[edit]

The power button is a small, round button, located on the top edge of the RP2 between the right shoulder buttons and the volume rocker. First, make sure that your micro SD card is inserted correctly into the port at the bottom of the RP2; the golden connector pins should be facing up, toward the screen side. Then press and hold the power button until the screen lights up (about three seconds), and your RP2 begins to boot up.

Initial boot-up, and connecting to Wi-Fi[edit]

The first time that you turn on your RP2 out of the box, it will boot into Android 6.0. If you have never used an Android device before, this can be a little daunting, but don't worry, as we won't be spending much time with it.

If you press a direction on the d-pad, you will see a square highlight that moves between the various icons on the screen. When in Android mode, the controller's "A" button is used to select items, while "B" is the "back" or "cancel" button. Use the d-pad to select the gear icon labelled "Settings", then press the "A" button to confirm. This will open the Android settings menu. 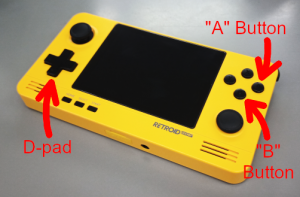 Use the d-pad to select "Wi-Fi" (the highlight will probably start there), then press the "A" button to confirm. Once the Wi-Fi screen has opened, press the "A" button again to turn on your RP2's Wi-Fi. It may take a few seconds before the RP2 starts to scan for Wi-Fi hotspots, so please be patient and don't press the button more than once as this may turn off Wi-Fi.

Once you see the name of your Wi-Fi router on the list, use the d-pad to select it, and press the "A" button to confirm. This will open a pop-up window where you will be able to enter the Wi-Fi password for your router. The virtual on-screen keyboard should open automatically. Use the d-pad to move the blue highlight around the keyboard, and press the "A" button to enter the currently selected character. To switch from letters to numbers and punctuation, select the "123_!" button on the far left of the middle row of the keyboard. To switch back to letters, select the same button, which will now be labelled "Back". When you have entered all of the characters in your Wi-Fi password, move the blue highlight to the keyboard icon button at the top right of the virtual keyboard, and press the "A" button to close it. After that, use the d-pad to select "Connect" at the bottom right of the pop-up window, then press the "A" button to confirm. After a few moments, your RP2 should connect to your Wi-Fi router.

Once your RP2 is connected to the Internet, press the "HOME" button (located to the lower-left of the screen) to return to the Android home screen. 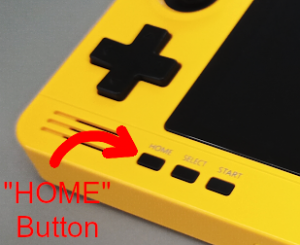 Downloading and switching to RetroidOS[edit]

From the main Android home screen, use the d-pad to select the middle icon at the bottom of the screen, which looks like a circle with six dots inside. Then press the "A" button to confirm. This will open the Android app drawer, which is a menu of all the apps installed in Android on your RP2.

Inside the "Toolbox" app, use the d-pad to select the "Install Retroid Pocket app" option, and press the "A" button to confirm. As long as your Wi-Fi connection is working, your RP2 should connect to the Retroid servers, and then download and install the "Retroid" app for Android. When it has finished, it will display a message to let you know that the installation is complete. Now exit the "Toolbox" app by pressing the "HOME" button to return to the Android home screen.

Open the app drawer again, and use the d-pad to select the new "Retroid" app icon, then press the "A" button to confirm. A window will pop up to ask if you really want to switch to Retroid OS; press the "A" button to confirm. Your RP2 will shut down and then automatically restart in RetroidOS mode. Once again, it will take 30 to 40 seconds to boot up, so you will need to be patient.

Congratulations! Your RP2 will now boot directly into RetroidOS every time you turn it on, and you should never need to touch Android again unless you want to.

The "Retroid" app in Android acts kind of like a key to the encrypted files that came on your included 32GB micro SD card. When you run it, it reconfigures your RP2 to boot from the encrypted files on the micro SD card, and then reboots itself. Once that happens, Android is no longer running, and nothing is shared between your Android internal storage (e.g. apps or any games you store there) and RetroidOS (including the games that you install within it).

Most controls in RetroidOS are displayed on the screen. One thing not shown is how to open the settings menu: hold the "HOME" button for a couple of seconds.

Adding your own games to RetroidOS[edit]

See this guide for how to add your own games to RetroidOS.

It is not possible to add new systems for emulation to RetroidOS. In order to emulate systems other than those supported in RetroidOS, you will need to switch to Android and use either Retroarch cores, or stand-alone emulator apps.

It is not possible to adjust emulation settings in RetroidOS. If you want more control over how your emulators work, you will need to switch to Android and use either Retroarch cores, or stand-alone emulator apps.